A special family event took place in the District, on Saturday 17 March 2007, when people from different Faiths, including Christian, Sikh, Hindu, Muslim, Catholic, Buddhist, Pagan and Quakers participated in a Multi Faith Trail and Seminar on Faith, Family and Friendship, in Leamington and Warwick.

The day started with a visit to the Shree Krishna Hindu Temple, in Crown Terrace, Leamington Spa, where people heard an introduction into the Hindu Religion from Caitanya Priya and also enjoyed the hospitality offered. The trail then went to visit the Sacred Well, located near to the Royal Pump Rooms, where a talk was given by Anne Patterson of the Pagan Faith about the importance of Water and the Earth.

The Faiths Trail then walked to the magnificent All Saints Parish Church in Leamington Spa, where Revd Christopher Wilson gave an inspiring talk on the history of the Church and an introduction into Christianity. People had time to look around the Church and admire the fantastic architecture and design.

The second part of the Faiths trail commenced with a coach journey to The Forest Hermitage, a Buddhist Centre in Sherbourne, Warwick. Ven Manapo Bhikkhu, a Buddhist Monk gave a talk on the Buddhist faith and an insight into the history and life at the centre. 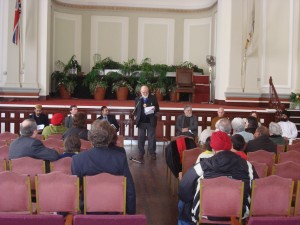 The Faiths Trail then went by coach to the Babe Ke Gurdwara at Blackdown, Leamington Spa. Everyone gathered in the main prayer hall and Jatinder Birdi gave an introduction into the Sikh Faith and the Babe Ke Gurdwara, which was then followed by Langar (vegetarian Indian food).

At 2pm everyone gathered at the Town Hall, Leamington Spa for an enlightening seminar hosted by Councillor Bill Evans where representatives from different faiths talked about Faith, Family and Friendship in Sikhism, Christianity, Islam, Buddhism, Hindu, Pagan and Catholic Faiths. The topic was specifically chosen with Mothering Sunday being on the next day. Councillor Bill Evans stated that he was pleased to live and be involved in a District where people from different Faiths had taken the time to walk, talk and learn about each other. The seminar was attended by The Bishop of Warwick, The Rt Revd John Stroyan.

The seminar and day concluded with Jatinder Birdi, Chairperson of the Warwick District Faiths Forum thanking everyone for taking the time in their busy schedule for attending the day and stated that everyone had learned a little bit more about the different Faiths that are represented and live as part of our community. He stated that this was the first of many events that will take place over the next few years with the support of the different Faith groups and people living in the District.